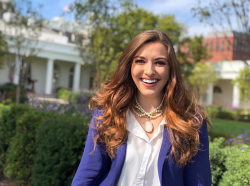 Meet Savannah Lane, the Executive Director of an international think-tank that promotes discussion and dialogue around socially relevant issues.

A young professional in Washington DC, Savannah is working as a foreign policy analyst and is the Executive Director of an international think tank, the Turkish Heritage Organization. She is also an active advocate for women’s empowerment around the world.

Ms. Lane was blessed with a boisterous and patriotic family and has a family-first mentality. She grew up in Richmond surrounded by her twin sister, passionate parents, two older twin sisters, and a loving younger brother who is a decade younger than Savannah and her twin. In this family dynamic, she was always surrounded by strong women who had their voices and opinions. Talking about her endeavor to advocate women’s empowerment internationally, she says, “It wasn’t until working in a variety of organizations and advocacy roles that I witnessed how important it was to empower other women that did not grow up with confident women supporting their journey. Because I had a wonderful childhood where my choices and opinions were valued, I decided to help others get that too!”

Before joining the Think Tank, Savannah worked several jobs in various capacities. She was awarded the title of Miss Virginia in 2015 and had several public appearances across the state of Virginia for social causes. Before winning this title, Savannah had also won the title of Miss Chesterfield’s Outstanding Teen, 2011. She has also worked in the DC policy sector and says, “I know that the consistent thing in every element of my life has continued to be the necessity for hard work and dedication.”

Ms. Lane found her passion for politics at a young age when she became Virginia’s inaugural ANNPower Fellow. She got to work with international leaders and learn from them through this fellowship. After winning the title of Miss Virginia 2015, she worked for national nonprofits, Children’s Miracle Network hospitals, the American Heart Association, etc. Savannah is one of eight women selected from across the country to serve as a Star Fellow for Running Start in a congressional office and she has moved to Washington DC from Virginia for her responsibilities. According to Global Peace Chain, she is the Communications Manager for a nonpartisan think-tank focused on the US-Turkey relationship, NATO Alliance, work of the UN, and foreign policy in the Middle East. Ms. Lane also volunteers with local organizations coaching young adults with disabilities in various sports, serves as an advocate for the American Heart Association, and helps the community in all her capacities. She says, “I am eager to continue promoting the SDGs of the United Nations through this role and help make this world feel just a little more connected.”

As the Executive Director of the Turkish Heritage Organization, Savannah helps bring women to the table, especially in underrepresented fields surrounding defense, security, and international politics, and aids the cause of every underprivileged person and refugee.

Ms. Lane believes that compassion is the most important ideal and value in every encounter, and says, “If you approach a situation with compassion, you will be surprised at how much more empathy and meaning you can give and thus experience yourself.”