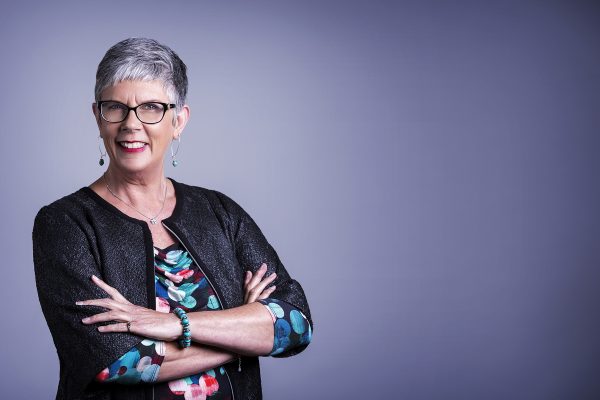 Bron Williams is a thoughtful and powerful leader showing women how to plug into their power. With a background in education and the not-for-profit space she brings wisdom and insight to the ways in which women can plug themselves back into the power they’ve always had – but have lost sight of.

In my world, men ran the show. Their voices were not only dominant, they were the only ones that mattered. This played itself out in my family where my brother, the only son, was allowed privileges in both speaking and acting that were denied my sister and me. This was evident in my church where men preached every Sunday, were on the board that ran the church and women were relegated to choirs, women’s groups and working in the op shop. Not a female leader in sight!

The only place in which I saw women leading was at school – as teachers, and as principal. I excelled in that environment where my natural intelligence and leadership was able to flourish. It is little wonder that I chose teaching as a career option or that I developed debating skills- my ideas and thoughts were valued in this environment.

I also experienced powerlessness in marriage with a husband who had grown up in the same culture as I had. While having a bright sharp mind, I quashed that, down-played it in favour of building up what I saw as my husband’s fragile self- esteem. While being a natural leader, I quashed that in favour of deferring to him, allowing my husband to lead.

And I have observed that it’s not only women from conservative Christian backgrounds that have been quashed, have down-played their abilities, and have felt they have no power.

In the workplace women are regularly spoken over and have their ideas either dismissed or usurped by men. Women have been humiliated for being female (aka not men) and both actively and covertly prevented from progressing in their careers. Women have felt diminished and useless, not enough, incompetent, devalued, unwanted, and unworthy. And so, they have decided to settle for what they can get, for what is available. They have played small.

What I have discovered is that when women decide they have had enough of playing small, fitting themselves into roles they weren’t made for, of bending themselves out of shape… only then can they be what and who they are.

It was only post-divorce, when I made that first break from the culture I’d lived in for so long, that I have come into my own – completing a degree, writing an honours paper and now doing PhD research. I’ve run a Salvation Army church and welfare centre, worked with asylum seekers in off-shore processing, am running my own business, and writing and publishing books.

Every industry that is now a large-scale, top-notch business once started as a small idea in the minds of entrepreneurs. What was that idea or motivation that made you start your business /initiative? What motivated you within to say “YES, go for it!”*

I have always been fascinated with why people behave as they do. And I’ve spent years on personal development, getting to know myself better.

My first business was called Backstory, where I worked with people to explore the backstories to their lives – helping them understand the stories that have shaped their decisions and brought them to where they are today.

This led me to learning more about unconscious bias and The Bias Specialist was born. In this role I consulted with corporates, government departments, peak sporting bodies and NFPs – such as Tennis Australia, Unilever and The Salvation Army.

I have now expanded my business – building on the foundations set by bias and backstories – to work with women to plug them back into their power – developing self-leadership (why we act as we do), having regular courageous conversations (with ourselves and others ) and leading from where we are (even if that is from the back of the pack!)

Everyone has their own set of challenges when starting an entrepreneurial journey. Still, the most essential part for others to learn is how you deal with those. Would you like to share with us your challenges and your coping mechanisms?

I started in business at age 60 and had to confront my own ageist biases that told me I was too old to start a business or that I’d left my run too late. My coach and mentor kept telling me that age is only a number, but it was only as I understood the family dynamics that had shaped my attitudes to what women “should” be doing in their 60s that I was able to let that unhelpful mindset go.

At the beginning of the pandemic I was just about to launch my professional speaking career. That was put on hold and I turned my focus to working with unconscious bias and picked up my first corporate client – Unilever – in the middle of the pandemic, speaking to their US finance department about how unconscious bias turns up in the workplace – and what to do about it!

In my 50s, I completed a degree and went on to do honours, writing a 20,000 word thesis paper. Now, in my 60s, I’ve begun PhD research into the link between bias and shame. That means Dr Bronwyn Williams should make her appearance when she’s 70+!

I would like to see – and am working towards – women plugging back into the power they have, but may have forgotten about or never really knew existed. When women plug into their power they discover they are superheroes in disguise.

What’s the most important thing you’ve learned in your personal life and professional journey? What is your personal motto in life?

I have two favourite mottos:

These two mottos set my intentions from the outset so that I live by my values and don’t get overwhelmed even when tasks are huge.

Women lead differently to men. We need different leadership styles. It is as we value these differences that equilibrium will form – rather than chasing equity where it can be seen that for me to win you must lose. Equilibrium brings resonance and balance to seemingly disparate parts.

With your grit and determination, you are making a considerable impact, breaking through, and serving as role models for many budding entrepreneurs. What would you want to say to our young women leaders/audience reading this?

Plug into your power. If you don’t know how to, talk with older women – they may well have the answers you seek. Or drop me a line.