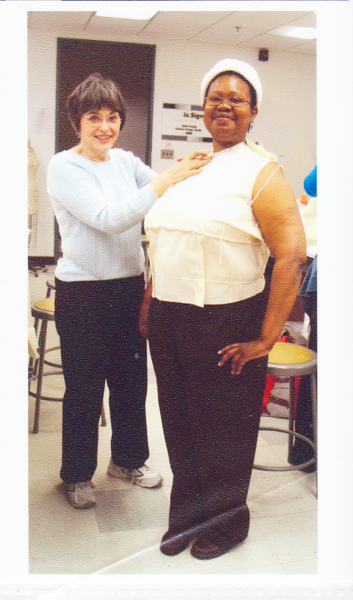 Laurel Hoffmann is a production patternmaker who learned skills in the industry. She believes in the drafting, fitting, grading, and sewing procedures she learned there and believes that those should be available to anyone who would like to learn them. She loved working in factories. Factories make beautiful things that people want to buy. She loves the classroom, where she enjoys interacting with her students. And, she likes to write, publish, market, and work with others.

What were your initial years of growing up like? Tell us about your life before starting  your corporate journey/venture/initiative.

I grew up on a farm. There wasn’t much money for clothing, but my grandmother  who lived just up the road, was a seamstress. She was my first sewing teacher. I  always planned to go to college and become a career woman, as had the women  on my mother’s side of the family, even back in the 1800s. I was unaware that  because of my sex, a career would be difficult to achieve. I planned to become  a musician. I studied piano, violin, and flute, but saw that the Philadelphia  Orchestra hired only men. I had a high soprano operatic voice. I thought about  becoming a diva. Sewing was something I did, but I never considered it as a career.  I was never very happy with anything I made until after I entered the industry.

I admired and patterned myself after my paternal grandfather who was  an entrepreneur and very gregarious, and my maternal uncle who was an  architect for the navy, designing the Great Lakes Naval Hospital and others.  I had many boy cousins. I competed with them as I saw no difference.  Later, when I was in college, I realized there was. It made me angry. I was  determined to show them up! They love it. My family encourages success.

Was there any turning point in your life that changed your journey? If so, what was it?  Please tell us the backstory behind it.

In my senior year I had enjoyed working on the high school paper so  much, I decided to study journalism. My mentor suggested that I attend  Syracuse University, which had the best undergraduate program east of the  Mississippi. I applied and was accepted.

It was the turning point of my life. Off the farm and away from the  Southern culture of my community, now living with New Yorkers, I  experienced culture shock, the changes were that extreme.

Shortly after arriving at the University, I had a premonition that one day I  would teach in college and also write something very important. Years  later, doing exactly that, I remembered the premonition.

Every industry that is now a large-scale, top-notch business once started as a small  idea in the minds of entrepreneurs. What was that idea that made you start this brand?  How did such a unique idea strike you, and what motivated you to “YES, go for it?”

In the late sixties/early seventies the fashion industry was leaving  Philadelphia, which in the 1940s had manufactured more women’s  clothing than any other city in the world.

The women I had worked with who sewed in the factories were losing  their jobs. They were putting their children through school, paying their  mortgages, moving up in the world. Now their jobs are gone.

The city did nothing to help. I felt I needed to step up. Now sewing at  home for my family, I quickly realized the design-room skills I had learned  in industry could easily be used in the home. I decided to write those  skills down, with the intent of providing those skills so the women I had  worked with and others like them could start cottage industries in their  homes and communities.

Tell us something about your initiative or current role. What is it about, and what  impact are you trying to make?

My son and I are making videos that are being shown on PhillyCAM. org which televises to the Philadelphia community. Although I have  approached the various colleges where I have taught, and other  organizations here in Philadelphia, only PhillyCAM has helped with my  project. https://phillycam.org/project/creating-fashion

I have finished my eight-book series that present the low-level  engineering apparel production procedures now used throughout the  global apparel industry. The procedures were developed during the First  and Second World War by small USA manufacturers. They had been making  other products using low-level engineering techniques when the war(s)  began. My books are now available on my website at LaurelHoffmann.com.  Their information mirrors that suggested by E.F.Schumacher in Small is  Beautiful. The books present high-end procedures.

Certificates can be earned by anyone who wishes to take and pass any of  the eight independent courses that are supported by my books and their  supporting materials, all available from my website.

I just taught a three-day master class for the Association of Sewers and  Design Professionals at their annual conference, this year in Baltimore.

Everyone has their own set of challenges when starting an entrepreneurial journey. Still,  the most essential part for others to learn is how you deal with those. Would you like to  share with us your challenges and your coping mechanisms?

To write my material I needed to know what was being taught in the  college fashion programs. Fortunately the 4-H Club I had organized for  my daughter and several of her friends did so well, I was asked to teach  the new sewing course at Jefferson University, back in 1990. That gave  me the opportunity to audit other fashion courses, as well as the textile  courses offered at the University.

I used the money I was paid to buy the computers, printers, and other  office materials I needed to write the textbooks, which I was now able  to test in the classroom test. When I stepped over to the Continuing Professional Education department I got fantastic feedback from the design room  personnel and other professional women who took my program.

It took 30 years to write the books. Everytime I would be about to give up,  something would happen that would keep me going. I have learned that  bad luck is good luck in disguise. Once I quit a job with no job to go to. In  the paper that night was an ad for a better job. I was hired the next day.

While the global pandemic of COVID-19 is associated primarily with adversities, it has  also brought about a true boom in startups, with successful entrepreneurship in many  countries. The pandemic has impacted all of us in one way or another. Would you like to  share your experience on a personal and professional level?

My son is a production editor for the English publishing company, Taylor  and Francis. When the pandemic hit he stopped commuting to their  satellite in Philadelphia and began working for them at home.

No longer commuting, he began to think about his plans to become an  animator and realized the time involved would be prohibitive.

He thought about all the material I have. He decided to join me  and promote my business. We now make videos, which as previously  mentioned, are televised to the Philadelphia community. He lives one  mile from our home. He has extensive video equipment set up in his  studio. He likes to be behind the camera, I like to be in front.

When I decided to start a 4-H Clothing and Textile club for my daughter  and several of her friends, I was told by the county agent that I could  teach any sewing method I pleased. When I said that I would teach  industrial methods I was told that was the one method I could not teach. I  asked why not? And was told We don’t teach that.

I taught industrial methods. The final (third) year of my club’s participation  in 4-H, although everyone agreed at the final fashion show that my  daughter’s outfit was the best in the show, she won no prizes and cried  all the way home. I pointed out that life isn’t always fair. But when my  club’s work was judged for the fair, all three girls received perfect scores.  Their work was shown at the fair with the huge rosettes they had won. My  daughter then realized the fashion show had been set up.

The girls, still in the 4H junior devision, just turned 12 and 13, had  completed the ten year program in three. Their achievements were the  reason I was asked to teach at Jefferson, even though I had yet to finish my  degree. https://laurelhoffmann.com/4-h-clover-club/

I believe that women need access to the sewing procedures used in the  industry, scaled down, so they can be used in the home.

Women need access to attractive clothing. Although some believe that  what we wear doesn’t matter, it matters a LOT! Everyday we get dressed.  Everything in our closets we put there. What we wear tells others who we  are. Wearing attractive clothing gets the better job, the pay raise, the man.  Sewing for others should pay.

What’s the most important thing you’ve learned in your personal life and professional  journey? What is your personal motto in life?

Maintaining one’s self-respect is, in my opinion, the most important aspect  of one’s life. One must stand for one’s convictions, right wrongs when  confronted, stand up for what is right. I walked off the factory floor when  my boss insisted that I do work that I knew would stop the factory line. I  want to be a person I respect and like, and that others respect and like.

Women are a growing force in the workplaces worldwide, standing shoulder to shoulder  with their male counterparts. There are cracks in glass ceilings everywhere, with many  women breaking through to carve out a space right at the top of the pyramid. What are your  thoughts about women’s leadership today?

Women’s leadership is growing. On my first job I was a clerk typist for  a lawyer who did workman’s compensation. I learned then that the  combination of male and female combines the skills of both sexes. I grew up  with many boy cousins. I lived on a farm with men around all day. I believe  that as more and more women stand shoulder and shoulder with men, the  world will benefit in ways we have yet to realize or imagine.

I am one of the first women to become a production patternmaker. Until  then, only men had such positions. I LOVE running factories. I was good at  it. I’m hoping to make those skills available to women all over the globe.

With your grit and determination, you are making a considerable impact, breaking  through, and serving as role models for many budding entrepreneurs. What would you want  to say to our young women leaders/audience reading this?