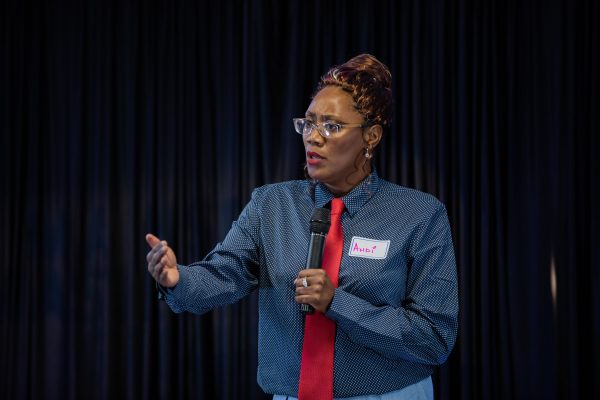 Andi Anderson is a Southern Belle residing in Atlanta, GA as a Small Business Owner and Serial-preneur. Single with no kids, she is reinventing herself. Her background is not rich with degrees. In fact, she has walked through life’s journey of overcoming God’s Ordained Tests.

She graduated in life and God presented her with her sashes in the only proper representation to ever exist. With Honors God gave her P.H.D. in permission to Preach. His. Doctrine. After graduating, she became a H.E.R.O.  H=Her. E=Empowering. R=Real. O=Obstinate mindsets destined to find greatness_TM

My childhood memories are of my grounded teachings, guidance and family. But that is where my hurt, separation, not trusting as well as longing to be different and great began. My journey has led me to share my story of forgiveness. However, still living with trauma, toxic and dysfunctional behaviors, I express in words how I am finally at age 48 breaking free of the generational curse over my life and walking away from a career of 29 years in dental healthcare. I told myself I was done with building the dreams of others, it was time to build my own. The Universe heard me and has placed me on His Path of Greatness.

My goal is to help be the bridge over the pits of devastation. Often I longed for a mentor and could not afford one; none answered my cry for help; most left me behind with broken promises. Hard-worker, I never wanted anyone to give me anything other than a chance. I was literally praying for someone to bet on me, take a chance with me. I have successful family members and friends, but not once did they share, flourish or teach me finance in my greatness, but wanted me to be only great enough to walk behind them and not with them. Relationships that tried to destroy me because I dared to think outside the box. Led by God, He was creating my plan. My business was created in 2017. And from there I tried my hand in several different things. I heard it said before that I have many trades and I mastered them all because I at least tried them.

My interest, God led Humans of Fuzia to me which is so amazing, there in India. I did not have the words until I visited their platform. I am a woman in strength who has prevented my own development, actions, ideas and impulse because of love and money. I lacked knowledge on how to use my talents. I can say I developed a writer’s block. Policies and manuals were already done and the owners where I worked never shared  that they had to pay someone else to create the structure. Until I had to help, I was clueless. Used and not appreciated, I learned what to do. Then I walked away from a career of 29 years with little to no money and my vision was now blurred.

Reflecting on my role model, First Lady, my Grandmother;  Mrs. Annie Will Sparks, Sr. I was fascinated with my grandmother ( my mother’s mother). She loved me unconditionally. She called me her “little black sheep”. However, I was not a problem child, the problems bothered me. She gave me God, and all the special things like scratching and greasing the scalp. Rubbing her legs with alcohol and polishing her nails and toes. My grandfather, Minister Curtis Lamar Sparks, Sr. She told me I was his favorite and he stated that people better be kind to me because I was special. That me is something different. Plus it was always interesting that she was a Senior, it was exciting to me that a woman could be a Sr. Wow, my story would be rare and different. Later in life my other mentor became Sojourner Truth. An American Women’s Rights Activist. Born Isabella Baumfree, she Is the hero of all times in my opinion.  I also admire Sara Blakley, the owner of the Spanx Womenswear Company.

Tell us something about your organization. What is it about and how is it helpful for people?

Well it is under construction. I am registered with the GA Secretary of State in Transportation, Retail and Public Speaking. It was developed as a blessing in disguise and years later I overstood God telling me the purpose was to gain time and financial freedom for myself. While creating doors of employment for others to knock on and gain that same freedom. We all deserve to be equal. I would love to donate a percentage to the duties God laid out for us. It is mentioned to feed the homeless and give them good items. But to care for the orphans and widows.

My turning point at age 36 years old, I was fired again from another dental office without a proper reason. I was preparing to buy myself a car and I was told by the new owner I should not do that, I guess that was the warning. When he fired me he had the partner dentist take me into the office after working all day. He had my last paycheck, my severance and bonus pay and he asked for the keys to the office. He leaned back in his office chair and asked me what I had to say. I asked why am I being let go? He stated that the job I had done for 5 years was being done incorrectly. I paused and stated, you never thought to tell me I was doing it wrong nor are you allowing me to be taught the right way? He had no words and we were silent for about 30 seconds. I said as I stood up and exchanged items. I have nothing else to say. Your mind is made up. The partner dentist apologized and said this is not what he wanted and that the new dentist bought the owner half of the business. Holding in my tears I gather my things. He walked to my car with me and asked if I was okay. I said I will be fine. I asked why he was walking me out like I took something and he mentioned that he had to recover the gate key. I laughed because I did not think of that. He met me down at the exit gate to let me out and said to take care. The owner returned from vacation and called me. He stated he was upset and that was not a part of his decision and he would write a letter of recommendation for me.  That was the final straw for wanting an office home. So I tempted myself out most times. It just did not work out. So I had to create a secure livelihood for myself. I finally stepped out in full faith June of 2021, during the pandemic. It was crazy anyway, I surrendered my works unto the Lord so my thoughts will be established. Proverbs 16:3, I have yet to do full work for some else and when I have tried I believe God said nope. So be careful and very ready for what you ask for.

I have three words. Disaster, Change and Opportunity_TM

What has been the response of the consumers towards your venture?

The consumers have been very supportive and most have become quality friends. I have a few recognitions, here are a couple. I was featured in the Women’s of Dignity Magazine as one of the TOP 50 Pioneer of Change leading a generation of followers. Blessed to now add the Humans of Fuzia star on my badge. I am now a #1 International and #1 Amazon Best Seller of my first Anthology Collaborations with 30 women from the Jon Talarico and Les Brown Academy.

How has your life changed because of your venture?

It has given me new hope and a dedication not to give up because I have someone out there depending on me.

Give a motivational message for the audience/women who are reading this.

It’s being said that there are no secrets to becoming successful. Well, I found out that there is one amazing secret. Get to know and love the Lord back. Because God has been the best thing that ever happened to me_Gladys Knight.