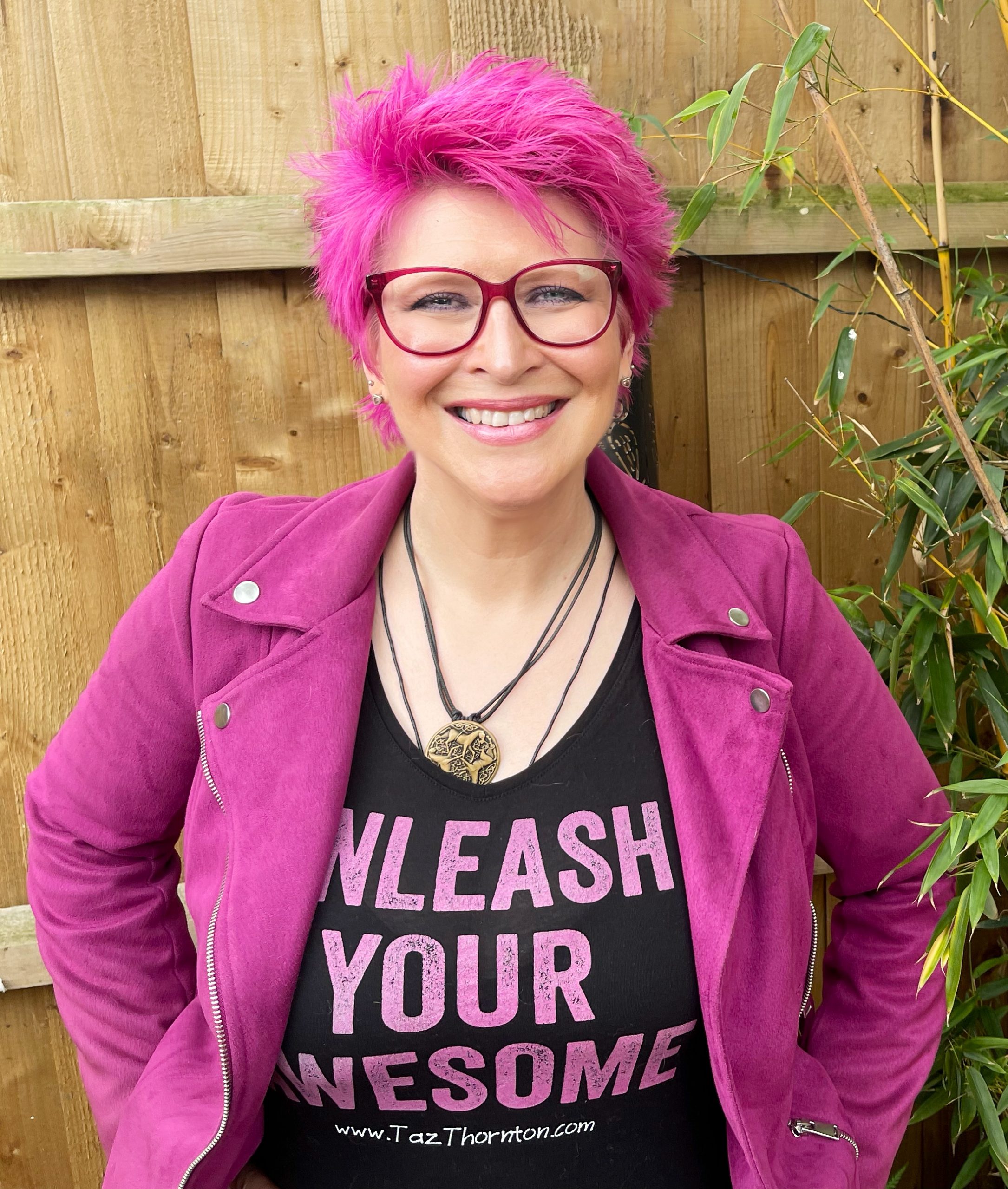 Meet Taz Thornton – Owner and Founder of  TazThornton.com, a platform where she empowers and motivates people to stand up strong in their lives.

Taz is a multi-award-winning empowerment and business coach, trainer, inspirational leader, as well as a 3x TEDx speaker and author of two best-selling books. She works with those who want to grow their businesses, campaigns or write their books mindfully and who are ambitious and willing to take action to do so. She offers group coaching and training both remote & face to face and 1-2-1 coaching for those who want to really commit regularly to create their own version of success.

Taz got her first job in journalism at 16 years old and became news editor of a regional newspaper group at 20. After being headhunted, she soon became head of a marketing department at a college of further education. When she met soulmate (now wife), Asha, she moved back to newspapers where she became chief reporter and then sub editor, responsible for designing pages for a leading regional newspaper group.

From here she moved on to become group editor of a number of B2B magazine titles covering healthcare and export. After being headhunted again, she moved across the country to help relaunch and redesign a market leading B2B magazine series, helping to transform it into award-winning and profitable publications.

However, although outwardly very successful and earning a good salary, Taz was unhappy. After battling with her mental health for several years, she knew something had to change, so she took the plunge.

Leaving her corporate life behind, she joined wife Asha in her PR company with the aim of building up her coaching business organically.

Working with a range of small to medium sized businesses, Taz and Asha also launched Tweeting Times – the world’s first interactive digital magazine for Twitter. Running the publication from their spare room, they interviewed a range of celebrities, including Stephen Fry who gave them a glowing testimonial for their work. The magazine drew many accolades and was featured on TV.

After growing the business, Taz stepped away. The move came five years earlier than the couple had anticipated originally.

Since then, she has gone on to coach politicians, musicians, actors, reality stars, service men and women including ex-special forces, two BBC Dragons, and a plethora of business owners and entrepreneurs. She has also spoken across the UK – NEC, NIA, Leicester Tigers Stadium, Aston Villa, as well as at business events in Milan, Sicily, Spain, Cannes and the UAE, for some big names and at impressive events. She feels blessed and grateful for this. She believes one thing which really did catapult her coaching business was this:

“I recorded a video in my car one day, quite on the spur of the moment, talking about depression, breakdown and feeling suicidal. It was about 15 minutes long and I intended to share it on Facebook with a private circle of friends. However, being in my car and using my smartphone I made a mistake and shared it publicly. I often talk about how that one honest, unabridged, unpolished video was a huge catalyst in my own business. The video went as viral as anything could in those days and brought so many clients to me that I had to work on managing my time as never before. It was a ‘mistake’ I learned from and I’ve never shied away since from talking about the highs – and the lows. Vulnerability can be a superpower,” she says.

Her venture TazThornton.com is a safe space for anyone wanting to become empowered around their life, business, their job or role and a safe space for learning and growing – be it as an entrepreneur, an author, a campaigner, a celebrity, a professional, a company director, a leader – or a combination of any of these.

As a coach, she works with each person from finding their goals and their purpose to helping them navigate blocks to success (both internal and external). She helps them come up with a road map to their own future and guides them on how to take action to start moving towards their version of success.

To date, she has won many awards and recognitions. She has recently been named as Female Business Professional of the Year (2021) for Central England; Empowerment Specialist of the Year 2021 in the Innovation & Excellence Awards and even named A Global Firewalking Ambassador. Another achievement includes being a listed speaker with the globally known Champion Speaker agency alongside such names as Simon Sinek, Tony Robbins, Richard Branson and Deborah Meaden.

As she looks back on her journey, Taz believes that her life is different beyond recognition – she runs a successful business that provides her with her version of success. She speaks worldwide, to large brands and small brands and she still loves coaching and training people from all walks of life. She is currently preparing her next books for publication. As an entrepreneur, she says that everyone should “#UnleashYourAwesome” at one point in their lives and see how things change for them!