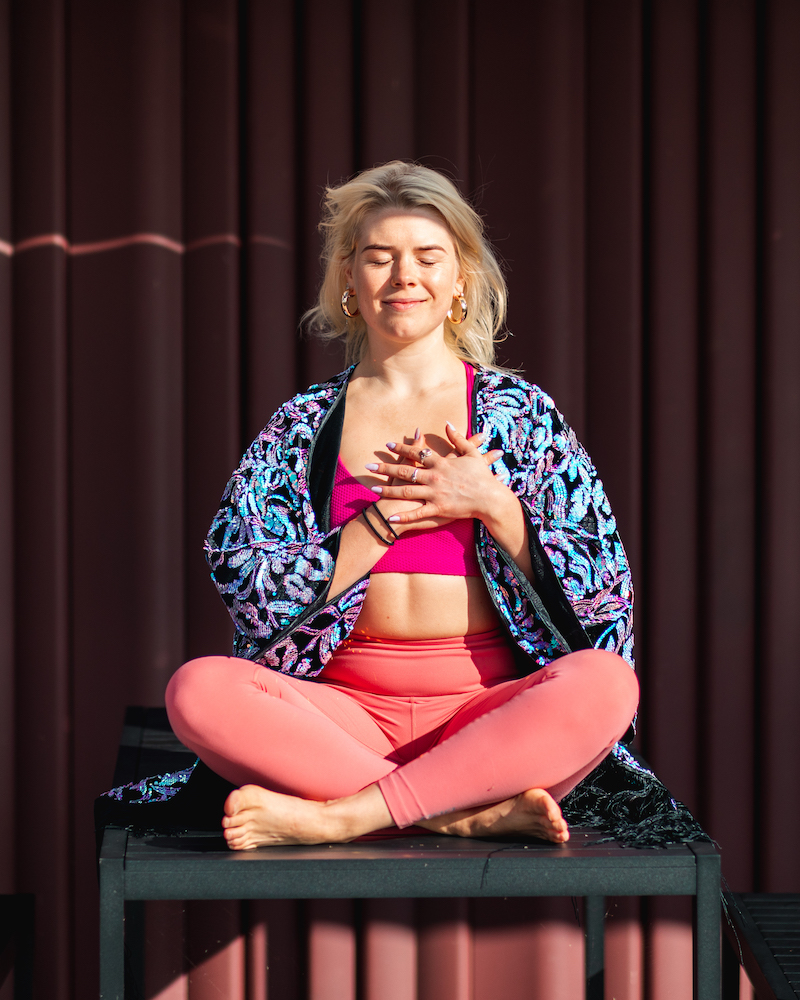 Meet Emily Harding, a Yoga Teacher and Founder of The Yeh Yoga Co. a wellbeing agency that offers yoga classes and events for everyBODY, empowering people to kick-ass, feel awesome, and embrace their #YehNotMeh!

Emily Harding trod the path of yoga when she was at the lowest point in her life. Earlier she had a difficult relationship with herself and her body, unable to embrace it, spent a lot of time drinking and living an under-confident life while also acting out in different ways. But it was through yoga that she started to make huge changes and now is working to help improve the world by bringing the life-changing magic of yoga to as many people as possible and make it accessible to those who feel alienated by it.

Emily grew up in a sleepy village in Kent, England, with loving parents. Although her parents divorced when she was 8, she was blessed and happy. Before starting The Yeh Yoga Co, she worked as a yoga teacher managing crazy hours at two jobs. She was underpaid, fatigued, and felt completely burnt out. This was also preventing her from creating something new. She finally decided to start her own corporate well-being agency and reach more people by bringing a group of yoga teachers and practitioners under one roof. She is trying to take yoga to corporate people who wouldn’t normally go for a yoga class.

Talking about the concept behind her agency, she says, “The Yeh Yoga Co is a yoga and wellbeing agency based in London, and we are on a mission to bring the life-changing benefits of yoga to those who desperately need it – stressed-out office workers! We recognize that yoga in the west has become a form of exclusive gymnastics and, it has really alienated so many people who could benefit from the simple wisdom and practices that yoga can provide, so we are on a mission to help bring yoga in a more accessible way than how it is shared at gyms and studios, into the workforce. We offer chair-based yoga called ‘Desk Yoga’, as well as introducing simple pranayama and meditation techniques, alongside more active forms of yoga, pilates, fitness, sound baths, and mobility.”

The Yeh Yoga bridges the gap between traditional yoga and the corporate world to make it more accessible. They break down and explain mindfulness techniques in a way to utilize them at workplaces. For example, they teach a lot of visualisation meditations to help employees relax before a presentation or meeting. They are on a mission to destress the workers and help them create habits to improve personal wellbeing and productivity.

Over the last two years, they have held both online and in-person sessions for many reputed corporate companies in London, including KPMG, Deloitte, Dell, Amazon, Google, Hearst Magazines, Lloyds Bank, etc. They have also organized exciting events like desk yoga at office furniture showrooms and rooftop yoga in the middle of Soho. The response from their clients has been overwhelmingly positive.

Initially, Harding felt like an imposter and still does four years down the line. But as she is growing, with time, the feeling should fade away soon. Currently, she is trying to manage technology as she live streams high-quality yoga sessions to her clients all over the world. She doesn’t have much knowledge of the streaming world and is learning as she goes.

With The Yeh Yoga Co, Emily has more time in her hands to develop her own yoga practices and pursuits. She has grown into a manager and a leader capable of guiding others. Also, now she has a better work-life balance. All this was possible because she decided to take a leap of faith. She took the chance, and that has made all the difference. Emily’s advice to other women would be a piece of advice given to her by her friend and mentor Bonnie Persons (who she teaches yoga for her platform School of SOS) – “the only thing riskier than doing it is not doing it“. This advice totally blew her mind, and it is really testament to her belief that if you have an idea, you should go for it.