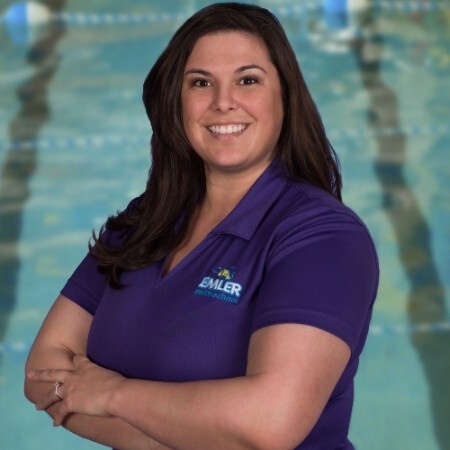 Meet Jennifer Brown, Regional Director of Operations at Emler Swim School, an institution that teaches children swimming with safety as their highest priority.

“It’s never too late for what you want to do. If you are motivated and are ready to put the work in, you can achieve anything”. Jennifer Brown, Regional Director of Operations at Emler Swim School, lives by these words. She started college late, and graduated at age 26. Her parents divorced when she was six, after which her mother moved to Texas from South California to stay closer to her sister. Jen’s childhood was full of ups and downs with a single mother who struggled to pay all the bills. She tried staying positive through all this and indulged herself in extracurricular activities at school, from sports to honors societies, to running for class office.

As she graduated from high school, she got accepted into most colleges but decided to not go. She was not ready to leave her mother and the thought of starting life in debt was intimidating. She went to community college and footed the bill by working full-time in the fine dining industry. She eventually went to Texas State University for business school and began looking for jobs in operations management.

While joining Emler Swim School, Jennifer never thought that she’d stay at the company for so long. Now, it has been a decade since she started as Aquatic Director, and by the time she was 30, was promoted to the position of Director of Operations. In college, she felt out of place as the oldest student in a class of 21-year-olds. Her friends had already started their careers and were transitioning into senior roles while she was still in college. Even though a little late, but with time, she too made it to the senior position at her current company.

Talking more about it, Brown says, “My organization is working on a mission to reduce childhood drowning, which is the number one reason for unintentional deaths in children aged 1-4 in the US. We have grown our mom and pop shop from 7 locations when I joined the team in 2011 to 29 today with more on the horizon, trying to reach as many places and kids as we can.”

The challenging part of the job is figuring out the balance of managing people. They are taught in school that business scenarios are robotic. But when Jennifer entered the real corporate world, she realized this was not the case. It took her time to learn that people want to work for people, not companies. She emphasizes the importance of caring about your employees and understanding their problems/situations as a manager. This has changed not only her professional but also her personal life. It has enabled her to keep employees for a longer period of time. It was a learning moment for her as initially when she was apprehensive to show emotions, she lost some good employees.

The customers’ response towards their venture has been quite positive. Brown shares an anecdote where a girl who accidentally fell into the pool used the skills taught her at the school to swim to the side and climb back. Her mother was grateful for the swimming lessons and the school. Several parents have shared the stories of children being saved from drowning. Also, ever since Jennifer took charge as a regional leader, her region has won “Best Places to Work” every year, something she is very proud of.

Being in the corporate world for so many years, she notes that women are not heard enough. We need to speak up more and work together to break the stereotypes. Although Jennifer’s career started off late, she proves that hard work is all that matters. Leaving an inspiring message for her readers, she says, “Listen to your gut and don’t be afraid to speak up. When you get to where you are going, remember you are there for a reason. Don’t allow doubt to keep you from shining. Don’t be worried about hurting someone’s feelings when the time comes to debate an important topic and decision for your company or your people. You are at that table for a reason.”