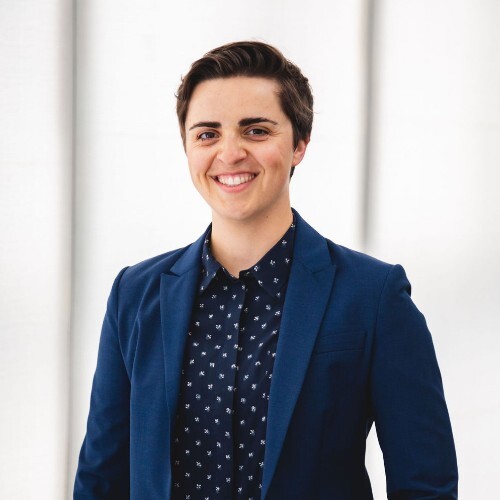 Meet Courtney Law, Director of Communications, Partnerships, and Digital Initiatives at Museum of Contemporary Art Denver, an innovative forum for contemporary art that inspires and challenges all audiences, creating understanding and dialog about art.

Even as a young girl living in suburban Dallas, Courtney knew she wanted to enter the realm of politics one day. While pursuing her undergrad at the University of Colorado Boulder, she actively took part in college politics. With no clue about getting her career started in the field after graduation, she moved to New York and began working as a second-grade teacher. Although she was overwhelmed with the job, she enjoyed coaching and mentoring the children during summer camp events. The time was filled with a lot of confusion and uncertainty for Courtney but she didn’t lose hope.

Soon after, she got her first office job as the Press Aid at New York City Campaign Finance Board. The agency worked with local candidates, running for positions like the City Council up to the mayor. Although Courtney accidentally landed up in the press release role, she found her calling in it. It gave her a chance to write about complex subject matters in a way that allows people who do not have a background in the field to understand what’s important. She worked directly with the candidates and she is grateful for it. It was a kick-start for her career and allowed her to understand her skill sets.

Then she joined the House of Democrats in Denver as an Outreach Coordinator and became the Deputy Communications Director in six months. Next year, she was promoted to the Director’s post in the department. Things moved really quickly for Courtney because of her skills, experience, and willingness to stick around. This helped her gain a lot of confidence. After a couple of legislative sessions, she started working as a consultant. “I spent about four years as a consultant kind of on the outside of what happens in the legislature like helping other entities, organizations, or coalitions pass legislation using communications as a tool. So press conferences, press releases, and full campaigns about how an issue might get attention from the general public and then get to a point where people feel like they want to take a stance on it and maybe get involved in some way”, she says.

Moving forward, she joined the Denver Department of Finance. Having no experience in finance herself, Courtney tried to explain it to people who also didn’t know much about it. After a stellar 10 years in the local government and state politics, she made a slight career change and took up her current job at the Museum of Contemporary Art Denver. As the Director of Communications, Partnerships, and Digital Initiatives at the Museum, she oversees the marketing operations, visitor and member services, and manages public relations efforts. She is constantly learning new things about the art world. This has helped her to broaden her horizons, and she is delighted to be working in such a creative environment.

Courtney’s journey through the years has been nothing short of a rollercoaster. She just happened to find her passion and things worked out well for her because of her willingness to be flexible. She believes that we never know what might change in and around us. “I didn’t know that being in communications was a job. It’s been a really good thing for me because I have a very general skill set, which means that I can move from health care to gun safety to contemporary art or municipal finance. Those things don’t sound like they belong together, but the storytelling aspect is a thorough line. Something you can explain to other people so that they do not just understand it well but feel compelled to engage with you. I think I’ve been really pleased with that. I didn’t have a good sense of where I was headed when I got started. I still don’t really. I’m open to what might shift in me, what my shift around me, and the things that might come my way as a result. This is sort of a counter to my personality, as I do want to control things as much as I can in my life. But the willingness to be open to how things change has served me pretty well”, she says.