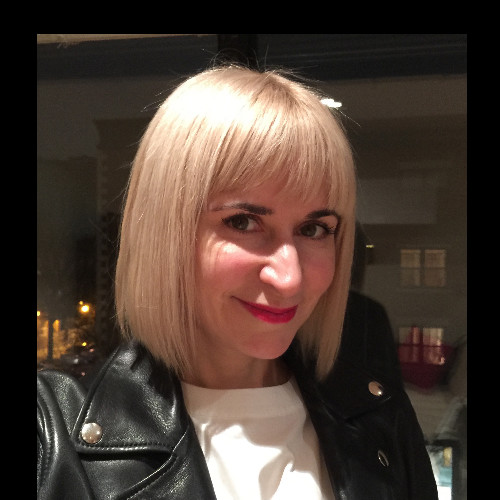 Anita grew up watching her mother, finding solace and happiness in making clothes. She was a talented seamstress, and this also rubbed off on Anita. She used to spend her childhood stitching clothes for her dolls as her mother did for her. Her parents were minimum wage-earning immigrants in Canada who found it difficult to make their ends meet. As a result, her father turned into an alcoholic and grew violent towards her mother.

Anita grew up watching her dad assault her mom. She became a survivor from a very young age and found an escape with being creative by sewing garments, sketching and turing vintage samples into new creations. She took psychology as her major in university, as she wanted to help the kids who have had a traumatic past like hers it was also therapeutical for her. However, she couldn’t break ties with her creative side. Her friend suggested she take up Fashion Design since she would spends hours looking at Vogue. Anita took a year off from psychology as she felt lost and didn’t have a vision for her future. Next, she graduated from Fashion Design school and started working in Canada before moving to New York City.

She was offered a job in the city as a Senior Footwear Designer which was always her dream to work in Fashion in NYC. She was promoted to the position of Creative Director in less than a year and hired her husband as a consultant to help her build multiple footwear collections for international brands. They worked and traveled the world together while living in a small apartment where they were almost never home.

The most challenging phase of her life was when they were trying to start a family, but it ended in multiple miscarriages. It was getting really difficult with work and constant international traveling. Anita started seeking help from a specialist and she found that the wounds from her childhood that never healed were affecting her health.

After a lot of personal growth and therapy, she finally quit her job, took a break, and went to the meditation resort retreat Vipassana with a vow of silence for 10 days. It made her centered and grounded. It brought her to an amazing place and made her believe in herself. She started her own company, ECOLE PRIMAIRE thereafter. Here she talks about the societal pressure that is always holding women back. It is a tough world out there for women where they are always expected to be sweet and nice. She says it was even tougher when she started out in the early years of fashion. Things have come a long way since then.

Anita tries to stay local as much as possible for her fashion requirements and work with small businesses. She wants her customers to re-use the pieces she has designed and even pass them down to the next generation. She does not believe in one-time use fashion that is equivalent to wastage. Anita acknowledges the fact that sustainable fashion is more expensive, but she is thinking about its long-term effects and how it will help the environment. Anita says, “buy less but buy better”. She aspires to be a leader not only professionally but also spiritually and mentally. She welcomes her team’s tips, recommendations, and suggestions while trying to connect with them on a personal level.

Her designs are inclusive of all cultures and body types. She likes shooting with her customers, the real people who wear and admire her clothes. Anita’s life has been nothing short of a roller coaster ride. She turned her childhood escape into her passion and career while also attempting to do right by the environment.