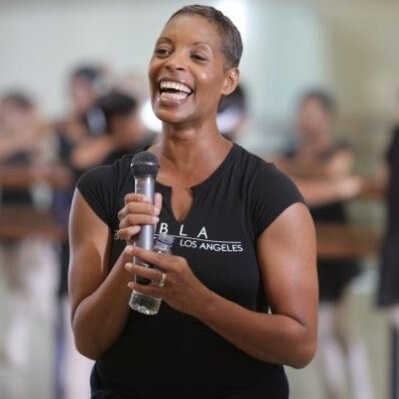 Meet Robyn Gardenhire, an artistic director, and Founder at City Ballet of Los Angeles, a non-profit dance institution that reflects the economic and racial diversity in LA.

Robyn Gardenhire started the City Ballet of Los Angeles (CBLA) in 2000 to “introduce ballet art from all walks of life”. She is working to make ballet training accessible to students coming from minority and lower income groups. As a woman of color, Robyn observes that not many people from the minority community practice ballet professionally, while some lack the resources to do so. But she took the leap of faith and tried to make a difference in the situation.

She was 15 when she joined The Joffrey Ballet. Then, she returned to LA to finish high school and start teaching the art form in the city. Robyn had the chance to study ballet in the best schools in the country through her scholarships. This made her realize that not everyone has the financial means or access to scholarships to receive such training. Ballet, she says, has always had a sense of class privilege about it and is out of reach for ordinary people. She wished to support children whose parents were unable to afford to send them to ballet school. This was her inspiration behind starting CBLA.

One of her friends told her about a program in their neighborhood’s community center that had recently opened a new ballet studio. They devised a curriculum in which they agreed to teach ballet for a $5 fee and the class was free for those who could not afford it. Hence, CBLA became a medium to give back to the community regardless of the student’s racial identity. People of all races Black, Asian, Spanish, Whites, etc. are welcome in the school. The motive to raise a proper dancer.

She addresses a low point in her career as a dancer with the American Ballet Theatre. She was mistreated and had no one to support and direct her. She sued them for discrimination based on unequal opportunities for minorities after she resigned. Gardenhire connected with a lawyer from NYU who took up the case pro bono and she won the suit. She got six scholarships in a year for minority students, and the theatre also did community outreach to welcome students for their programs. It was a gruesome phase for her, so much so that she didn’t even look at the case files till later years. She also didn’t discuss the case with anyone, and it took her time to come to terms with reality. A part of what Robyn is doing today is because she doesn’t want someone else to go through what she did in the initial years of her career.

The struggles she faced during opening a studio reinforced Robyn’s belief in her dream. She is still awestruck by the fact that she was trusted and was handed over the studio. She can’t believe her luck even after 20 years. Even today, there is an ongoing pressure of fundraising. Grants and donations from her friends and family hold the ballet afloat. She is contributing her time and effort to the institution without accepting any fee. She appreciates all the support the nonprofit has received so far.

Currently, she is a board member at the School of American Ballet Theatre, which is associated with the New York City Ballet. She represents the minority community and diversity at the theatre. It fills her heart with pride when the dancers raised at CBLA get into top-tier institutions like UCLA, USC, and UC Irvine. They are trying to make it possible for students to attend university while continuing their ballet training. Come what may, Robyn is committed to assisting minorities and is constantly searching for ways to make things better for them. She is doing everything she can to help them follow their passion.