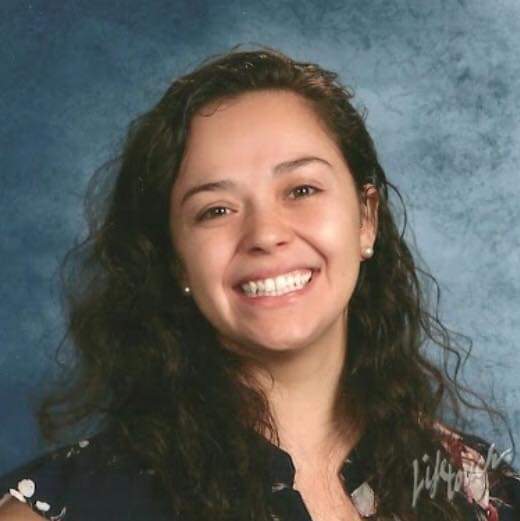 A very positive person who loves to stay busy, Melinda is Adams State University’s new cheer coach and works for SSS as the director. She also helps her husband run his boxing gym in a very rural town. In addition to these jobs, she enjoys reading, helping others, and going to church.

Because her father is from Mexico and her mother from the United States, there was a conflict between cultures among Melinda’s families when she and her siblings were growing up. Her parents were very young when they had her older sister – her mother was about 17, and her father was almost 19. Melinda was born 10 months later. Talking about her childhood, she says, “At times, we would live with my grandparents. We moved around a lot. We are a family of 6, and many times, we lived in two-bedroom homes or trailers. Sometimes we only lived with my mother so my father could have job opportunities. Eventually, my mother became a teacher, guiding the way for my education.”

Ms. Viescas had to struggle during her teenage years. She got into a fight with her mother when still in high school. One day, she was asked by her mother to follow the rules she had set or leave her house. She recalls, “Being the rambunctious teenager I was, I left my mother’s home and started living with my boyfriend, who is now my husband. Back then, we moved into our own home and continued with our college education.” Melinda had to go through a lot of hardships in college – she was not able to graduate on time due to poor advising, she lost her meal plan in absence of enough finances, and she was unable to find a home initially. Later, she got in contact with a gentleman who hired her for her first “TRiO” job. She says, “I worked really hard and was able to obtain further positions from that one position. I believe that everybody needs at least one person who believes in them and pushes them to achieve their dreams. Had I not met the gentleman who hired me for that first TRiO position, I wouldn’t be where I am today. I would have quit when the university told me that I did not have enough credits to graduate. I would not have encountered my passion as well!”

As the Director of Student Support Services of Adams State University, Ms. Viescas helps first-generation and low-income students through their college endeavors. SSS is a Federal TRiO Program funded by the U.S. Department of Education with a mission to advance and defend the ideal of equal educational opportunity by helping disadvantaged students overcome various barriers to higher education. They offer services like Academic Counseling, Financial Literacy, Career Counseling, Graduate School Preparation, Tutoring, and Mentoring.  She explains, “It is helpful because we are a safe place for our students to come and get whatever it is that they need. Students who participate in our program, on average, are more likely to return to our institution, have good grades, and graduate within 6 years.”

Melinda had to come across a lot of hardships before getting a chance to touch the peak of success. Before she found a perfect job in Texas, it was a challenge to find job opportunities with an organization that would care about her and her interests. Additionally, she was also in an interim position. At her Texas job, she had the best director ever, but when the director left, Melinda was left feeling that the new administration had different priorities. She is satisfied with her work today, but there are still a few challenges to overcome. She says, “Currently, as a young professional, I find it hard to ‘find my place.’ Many of the other professionals at my level in the institution are quite older than me. I find that many times, they do not trust in what I am doing or saying.”

Melinda has a motivating message for everyone who wants sage advice to keep going. She says, “If life gets rough, no matter the circumstances, keep pushing through. There is something great ahead for you, but you have to believe in yourself because no one else can do that for you!”