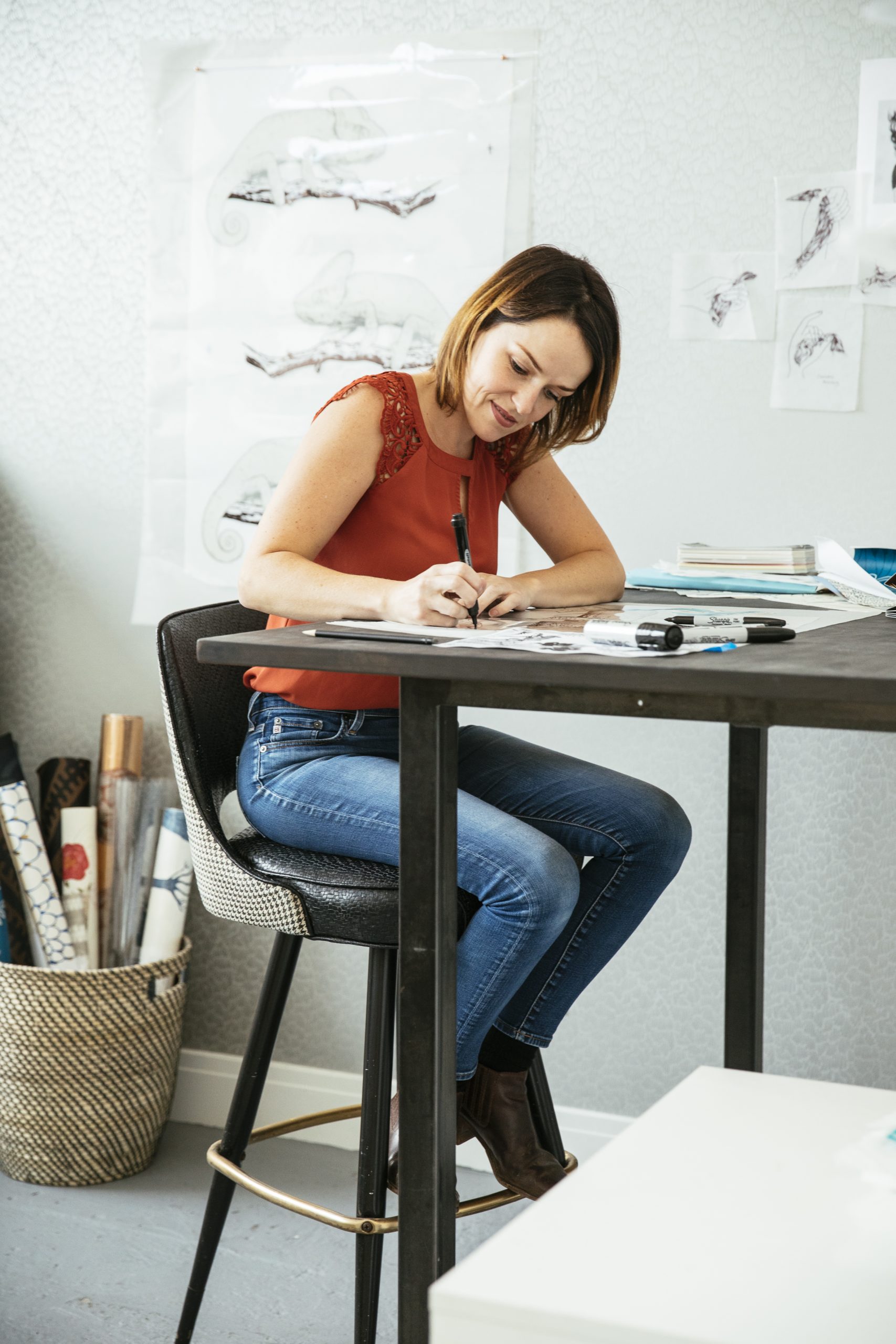 Meet Erin J Minckley- a visual artist, an entrepreneur and the founder of a luxury wallpaper company called Relativity Textiles, based in Chicago.

Erin is a lover of all things foreign- she loves to travel and explore new places that led her to initially develop a habit of collecting wallpapers and then eventually creating her own art designs inspired by many different countries around the world. For her, taking a journey from being an artist to being a business owner wasn’t easy as a lot of artists aren’t able to start successful businesses that become profitable. However, her hard work and fate led her to becoming one of the most successful people in her industry, which made her write the book called ‘Artists To Thrive’- it’s one part memoir, on one part manifesto where she has shared her experiences for creative souls to overcome the mindset of an artist. On being asked about what made her write this book, she says, “I think a lot of times, we’re told from the time we’re young that artists are going to always starve. It’s not a real job, like, get a real career and that’s limiting us as creative people to thinking that we’ll never make it and we’ll never make a million dollars, we’ll never be wealthy. It holds us back from becoming wealthy. I believe that people who demotivate artists like this are not subjected to the kind of technology now art has. I mean, art is more than just a visual subject- it’s life!”

Ever since Erin was in elementary school, she identified herself as an artist and her parents encouraged her to be anything she wanted to be. After majoring in art, she found herself to be left with really bleak prospects for jobs. It was then that a harsh reality really kicked in- what could she possibly do with a degree in arts? After exploring a lot of other options here and there, she decided to get her teaching credential and teach art. However, she couldn’t find her solace for too long in this field too and many years later, she went to graduate school and got her Master’s degree in Fine Arts- for she wanted to keep pushing herself and use her talent to the maximum potential.

“In graduate school, I took many courses in a field called Fiber and Materials Studies. And it’s basically ‘textiles’- like cloth weaving, dyeing, printing, so on and so forth. Textiles i’s one of the first human art forms because we had to dress our bodies, and create a home to live in. So textiles are historically very important, quite utilitarian, but they are their own art form too. I learned to print and began by screen printing my own fabric and then also created sculptures and different things from those prints. I was mostly inspired by the Middle East and places that have ornate, decorative architecture, titles and all these different things. Like, it’s so inspiring to me because of the massive amounts of patterns- and I love patterns! As a professor, most of my students made more money than me, through part-time student jobs. I realized that I could also do something better by doing what I love and turning it into a business that would pay my bills- and this is how my wallpaper company Relativity Textiles was born!” she says.

When she first started five years ago, Erin had no money as capital to start a business. She calculated that she was going to need around $20,000 to start her company and for other things like the web designer, the legal LLC formation, photography, material to make samples and ship them, etc. For her, 20 grand was like more than what she had made any year and it seemed like an impossible milestone to achieve.

So what did she do?

“I crowdfunded through a kickstarter campaign. If I hadn’t done that, I wouldn’t be able to raise $21,000 in 60 days, which meant I was now successful both as an artist and an entrepreneur! When you are an artist, you have a flair of telling stories the way a storyteller does. An artist becomes a storyteller when he/she just doesn’t sell their product but also creates a connection that sells,” she says.

For the women who aspire to start their own entrepreneurial journey, she suggests that once you do it, you are not going back. You are always learning something and reinventing yourself. All you have to do is, just defy the odds- like you have to beat some serious odds, the odds are against you and you are all set!