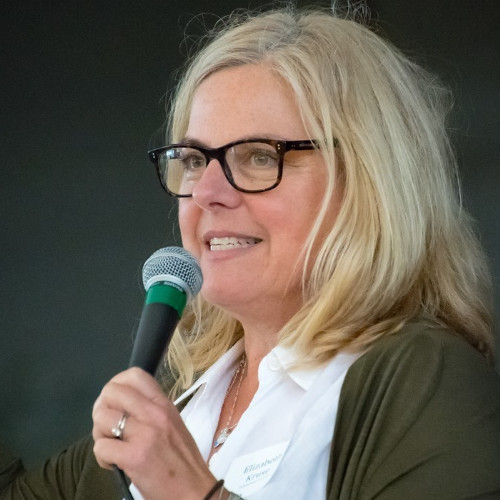 Meet Elizabeth Kruse, the founder and director of DebateAble, a debate education program for elementary school students that not only teaches students to be impactful speakers but also prepares them for life.

When Elizabeth founded DebateAble, little did she know that she would be impacting so many lives and giving confidence to these young speakers. With her passion and relentless attitude, she motivated students across the globe and brought them together under one platform, when the world was falling apart due to Covid and distances were increasing.

A mother of two incredible sons, Elizabeth had worked as a textile designer, bartender, criminal prosecutor, and teacher, but found her calling as a debate mentor when she first hand saw the impact that debate has on the lives of young people. She says that “When I took the post of the director of a small elementary school debate program for a local non-profit, I was most moved by the ability of kids to think critically about all types of issues and to become confident public speakers at such a young age. It was in 2012, after that program folded, that I decided with a partner to initiate our own after school debate program to help students debate with other kids in different locations, with different accents, cultures, backgrounds, and ideas”. With this aim in mind, DebateAble expanded organically for several years, getting recognized and licensed by educators nationally and internationally before its growth became intentional; but the primary focus had always been on the kids and not on revenue. It was this altruistic ideology of Elizabeth that always made DebateAble impactful.

DebateAble uses debate instruction to teach children to think critically and creatively. The program encourages kids to speak with confidence while actively listening to others, and empowering them to use their voices for issues that matter to them. Besides teaching students how to think clearly and express themselves with confidence, it also encourages students to consider both sides of any issue and be respectful of differences in various viewpoints. According to Elizabeth, “These are our debate lessons, but more importantly, they are life lessons”.
DebateAble today is a well-known platform, but Elizabeth’s journey was never without struggles. She was an educator and motivator with a vision, but her admin skills were not perfect. Learning how to operate a business, from human resources and hiring to creating and managing a website was a challenge for her already, but it became a real problem when her partner, who managed the business left the partnership in 2016. She decided to take a step back and hired an amazing admin and accountant who, from then till now manages the financial and managerial aspects while she focuses on the program, the overall development of the students, and the quality of the coaches. Challenges never end, but growth shouldn’t stop. When Covid hit, schools closed down to control the spread of the pandemic, but Elizabeth didn’t lose hope and quickly moved all the clubs to an online mode. This challenge posed by the pandemic was thus converted into an opportunity as the number of students enrolled in her program increased, which enabled her to affect more lives. The program is free from boundaries and limitations, and now has students from over 20 states!

DebateAble has recently won the ‘Best of 2020 Clubs’ Award from ‘6crickets’, a national platform that offers several hundred clubs to families online. The enthusiasm of the online clubs’ participants and their families is what inspires Elizabeth and keeps her going despite the challenges that come her way. In her words, “It’s brought new life to the program and has allowed us to bring debate to an ever-growing and widening group of young people. Regardless of what happens in our world’s future, my business plan has shifted to include online clubs indefinitely”.

Elizabeth believes that passion and curiosity are the key elements behind her success. Her passion is to bring a positive change in the world and DebateAble gives her this opportunity every single day. She believes that helping students evolve into critically thinking individuals is the greatest work accomplishment of her life!