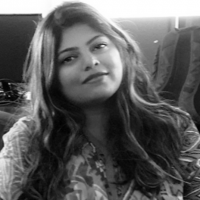 Meet author and Senior Content Marketer at Human Focus International, who also has her own social initiative, ‘Chaaon – Sab k Liye’, which creates awareness against child and animal abuse.

Who would have thought that an English Literature Graduate would swiftly work up her way to having an illustrious career in content marketing in such a short span of time? In fact, to top it all and by being the author of a published book, is unfathomable for most people. Despite having authored 100s of online publications, she is most proud of her own book.  “I began writing pretty early – I was in 3rd or 4th grade when I was trying to write poems on generic topics like ‘My Cat’… don’t we all? However, I never really enjoyed writing poems as such. I was mostly interested in reading novels and stories, but not poetry or songs. Therefore, for me to end up writing a book on this genre years later, was surprising!” When Sijdah joined the prestigious Government College University in Lahore to pursue her graduation in English Literature and Language, she didn’t really expect to end up becoming a romantic or to even understand poetry ever. “I just love Sylvia Plath – so much emotion!”- gushes the author of ‘Red Sugar, No More’ as she reminisces about her favorite poetess.

Talking about her experience of penning down her first book, she recalls that she began working on it at the end of 2016. Even though she wrote each title in one go – there was a lot of gap between writing them. In the book, each title has a chronological order mentioned over it to give the reader a feel about the character at hand. As she goes further down the memory lane, she says, “There aren’t any traditional publishing houses in Pakistan & the two I did share my manuscript with weren’t interested. One never replied and the second one just told me that my work wasn’t worth a read. I stopped trying after that. However, my friends began telling me to not give up and were very supportive. And well, I sold over 60 copies in the very 1st month within Pakistan so I guess the publishers weren’t really right!” However, the writing prodigy hasn’t had an international marketing campaign run for the book yet because of her busy schedule, so she didn’t really expect too much from Amazon. But as fate would have it- her e-book garnered so much attention because of the rave reviews that it got sold in both the UK and the USA. In fact, her readership even expanded to India, which came as a pleasant surprise to her.

When it comes to her professional growth, she started off in the corporate world in November 2017 at ibex.co as a Content Marketer. There, she had the opportunity to work with a large team and soon, she became an integral part of their core team. Soon after, she started getting offers from different companies because of her outstanding talent and it was Human Focus International that won her heart. Be it Creative Marketing, Brand Management, Digital Marketing, SEO, SMM, Content Marketing, Email Marketing or Adverts- she expanded her knowledge and expertise at this organisation for the next 2 years and 10 months of her life. It is only now that she has finally decided to move on in her career and explore new horizons. One of these is her own initiative ‘Chaaon – Sab k Liye’, which actively creates awareness against child and animal abuse and encourages people to have a peaceful life that is free of violence of any kind.

With so much experience under her belt, this is what she says about her journey- “I have worked both ways – smart and hard. They say you only need to work smart to succeed and not hard. Those are words from people who crushed others – don’t do that. If we don’t work hard and deserve a position, we’re just killing someone else’s well-deserved chance. I kept learning new things and I still do. To ensure my theory, I even created my own website. I did everything myself for both my book’s and social initiative’s website which helped in practical learning as well.”

Even though she agrees that being a woman is difficult no matter which industry we are in, it is really important for us to keep moving forward in order to be successful. According to her, a hurdle of any kind in life can be handled in three ways- by being optimistic about things and accepting that it’s only constructive and not meant to make you feel inferior; by not bothering to listen to what comes out of the mouth of someone who tries to put you down and focusing on your growth; and most importantly, by standing up firmly for your values and hard work. With this, she motivates all women to come out with confidence and not let the world rule them- for they must be the ones ruling it instead.