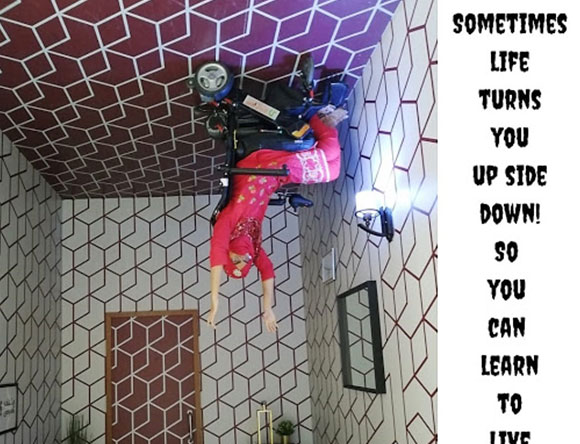 ― Joe Dispenza, You Are the Placebo: Making Your Mind Matter

How do you define a wheelchair? – A crutch, a chair that binds a disable person – a wheelchair-bound? In the words of Dr. Asma Mahmood, it’s an enabler. It enables a person in their mobility to achieve the goals they are meant for, which otherwise would have been a dream for many. You are not wheelchair-bound rather you are now independent enough to run your own life.

After being diagnosed with Multiple Sclerosis in the final year of her MBBS, Asma didn’t know how to clear her exams with her right arm paralyzed and herself almost immobile. While most people would give up on life and fall into depression, Asma did otherwise. She recalls that her then Gynaecology professor and now the Health Minister of Pakistan, Dr. Yasmin Rashid, telling her that it’s not the end of life. And exams are compulsory for her, either she prefers to take them in bed or in a wheelchair, wherever. Assistance would be provided to her to write in the exam. Throughout these times, it was not only Asma’s, but her family’s and teacher’s resilience as well that shifted her perspective of how she would see herself after this setback.

It’s not as easy as it sounds as Asma narrates what it was like then. She believes that for her there may be all doors closed, but then only this one door was open. She had always aspired to become a doctor from the one leading medical university of Pakistan i.e. King Edward Medical University, but she never quite planned her life after this one milestone. She says that our Creator is the best of planners. For her, as soon as she was diagnosed with her autoimmune condition, she could see all the doors closing on her. Now, it was on her to decide whether to grieve for her loss of mobility and the future that she had imagined for herself,  just like every other girl her age, or should she keep on trying knocking on every door?

Every door would turn out to be closed but there was always that one door open which led her into a hall of other closed doors, but then again there was this one door open. In this journey, she gradually learnt the meaning behind Joseph Campbell’s “Follow your bliss..”.

Asma decided that if she can’t run, she will walk. When she can’t walk, she will crawl. She started believing in the invisible hand that was keeping her moving irrespective of her pace. She calls this hand as the hand of God. She understood that everything happens for a reason and in her case it was to accept the will of God and find the good in it.

Today, Dr. Asma Mahmood (M.B.B.S., CHP, MRCP1, RMP, Certified in Food & Health from Stanford) is a medical doctor who runs her own set-up by the name Healing Hijama Clinic – a holistic treatment center where tibbe-nabawi, naturopathy, and modern medicine as per latest research are applied to help people heal. Asma fought a tough battle, but being a doctor herself, she left no stone unturned to find a remedy for her when even the conventional medicines failed to give her a functional life with her condition. She is giving people the same gift that she used for herself as she believes that this is what she was meant for. Life after completing her MBBS wouldn’t have made much sense to her if she hadn’t been through what she has gone through, as she reveals. She has found the purpose of her life. She questions people how they define the term “notable achievements” because for her there have been a lot of accolades, cups, and medals, which she had collected before her diagnosis, but they are nothing as compared to where she is today. Her biggest achievement is becoming a healer from a patient herself; and financially independent!

Upon asking who has been the most influential person in her life, she says that it’s God! He has always had the major influence on her life from being her decision-maker, even if against her will, to being the invisible hand, guiding her through the path as He pleases for her. If you are reading this, Dr. Asma has a message for you:

“You are the creator of your own life if you learn how to control your thought processes! Be vigilant to address your cognitive distortions as they have their consequences since a positive mindset can potentially lead to a positive life!”