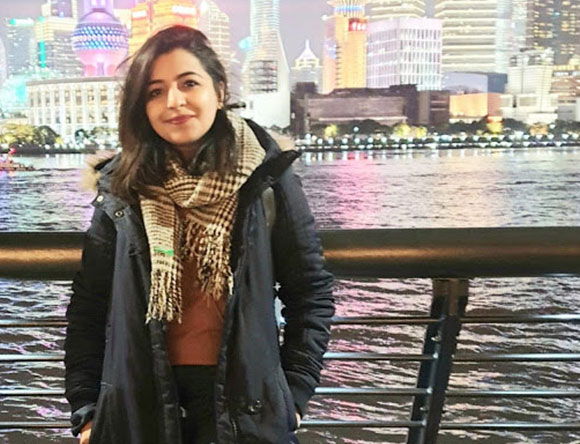 “I am not afraid of storms, for I am learning how to sail my ship.”

Zarish Malik, a 24 year old entrepreneur from Lahore, Pakistan, works as a Director of her own company Galaxy Moving Systems Pvt. Ltd. She is the youngest in the business of elevator engineering so far. She believes that “there is a way to do things better and one needs to find it”.  She is working on transforming the traditional form of the elevator business industry into a technologized one. For young entrepreneurs, she gives a message that there is no need to go for mainstream ideas. There are other industries as well, like in her own case.

The pathway to this wasn’t that easy as it sounds. The question is what inspired Zarish to stand here today?

Zarish says that the most influential person in her life is her mom. She has the most lively laugh, as everyone says. Whenever they are facing any difficulty in life, her mother just laughs it off saying, “Things will work out!”

Zarish’s mother never got the chance to complete her education as she got married at a very young age. At 18, she was married. At 19, she had Zarish and then three other kids. She spent her married life in a prison of a home with her abusive husband and in-laws. Until one day, our little Zarish, back in her 7th grade, asked her mom, “How long do we have to bear with this?” And why do we have to?” She made her mother think about the unthinkable. Afterwards, her mother along with her four kids moved out of the house and went back to her parents’ home.

For a woman to return to her own home after an unsuccessful marriage is a taboo in our society.

The next onset of worries began as soon as the finances of Zarish’s family became a burden upon her maternal grandfather. Their educational expenses became the major point of contention. While Zarish’s education went smoothly, her younger siblings weren’t doing that good. There came a point when even Zarish’s grandfather gave up hope because her Intermediate result couldn’t meet his expectations. Zarish lost hope as well and believed in his words, but her mother intervened. She did not, for obvious reasons, want a similar future for her daughters. She stood up for Zarish’s education just like the little Zarish did once for the wellbeing of her mom.

To secure admission in a university with a fee-waiver, Zarish had to dig out an opportunity. She didn’t have enough marks to come on the merit list but she did have a long-forgotten passion for karate. She resumed her training and got selected for the scholarship on sports-basis in Bachelor (Hons.) in Business Administration. Only in the first year, Zarish’s perception about life and herself transformed. Her mother got diagnosed with breast cancer in its early stages when Zarish was in her first semester, but they managed to get a free treatment. During this time, Zarish challenged her comfort-zone and started juggling with different responsibilities simultaneously. She travelled in public transport, which scared her at first, and started attending conferences on topics like women in business, social responsibility, etc. She also began networking in the meanwhile. She went to intervarsity karate tournaments, won medals for her university, and earned a black-belt in karate, while she managed the household, a sick mother and her studies. At 19 years of age Zarish had one thing to say:

“I do not like to be treated as a child. Treat me like a woman. I have earned it at a very young age!”

In four years of her undergraduate studies, Zarish had already gained the experience of working with brands like Coca-Cola, Hardee’s, TiE, and many others. Her work experience spans from internships to being a strategy executive. Today, she is her own boss, as she likes to say it. The corporate life was indeed a thrilling experience at such a young age, but she also started volunteering for community work. By seeing people living in the most adverse circumstances, she developed faith in human ability to withstand any calamity befalling on them.

At the same time, she believes in the words of her mom that there is a supreme power that is watching us and will take care of us as well — the Creator of us Creations!

Today, Zarish wishes to be successful not in terms of gaining popularity but being able to inspire others from her struggles. To the young and clueless girls, she stresses to evoke the hidden potential in themselves. You are what you tell yourself and you can be anything!