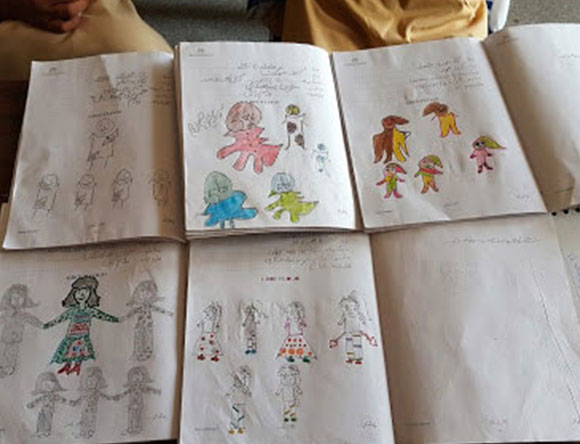 Youth, like pristine glass, absorbs the prints of its handlers. ― Mitch Albom, The Five People You Meet in Heaven

“Rahbar” an urdu word that means “a mentor” and in the context of The Citizens Foundation, it means someone who guides their students on the path from learning the power over their mind to creating their own destiny — this has been the curriculum of the Rahbar programme throughout the seven weeks. TCF is known for its largest network of schools in Pakistan covering rural, semi-rural areas, urban slums, etc., in short even in the areas with the least developed infrastructure. I have been their Rahbar: A fortunate mentor to TCF students.

It’s a multi-layered story. A collection of individual resilience to form community resilience.

The TCF School Irshad & Mazhar Campus is located in a small village called Manga near District Kasur, Pakistan. After travelling for an hour with my teammates through a narrow and bumpy road to the school, I found myself surrounded with brick houses and shops. The grandparents of the families were seen sitting on the charpoy in front of their homes with their young ones early in the morning – watching our van passing by and waving at us.

None in their uniforms. None on the way to their schools.

Only after reaching the school did the reality of individual resilience began. I had been entrusted with the responsibility of mentoring five of the female 7th grade students, who marched into the classroom with confused round faces which then broke into big smiles. Everyone was welcomed warm-heartedly. The five mentees had five different stories, which may overlap but they were five distinctive children looking at me inquisitively. They reminded me of my own self with their child-like wonder and curiosity about the world outside their school. They would fiddle with their uniforms, picking fluffs, checking their hair and head scarves constantly ensuring if they look perfect. Their efforts to maintain a good image in front of me reminded me of myself, yes.

There is chaos in being a child!

There are expectations from our minor yet significant physical-emotional selves that “childhood is all fun, games, and conformity”. When all this turns us into a perfectionist, no idea!

Then, the ice-breaking session began. The first mentee introduced herself. Her body was shaking with self-righteousness and moralism, as she talked about how she is not okay with injustice in her community, with tears in her eyes. People die not because of illness or by accidents. People die because of someone’s enmity against them. And the culprits move freely. This young school-girl wanted to redress all the vices of the society.

The second mentee came forward. She had no words to describe herself other than her name. So the rest of the mentees joined in to talk about her, “She is aggressive, short-tempered, and does not speak much. Once she left school and we all visited her one-by-one to convince her to not give up on this opportunity today.” They told her life will be better tomorrow. The girl until then remained silent about the many tragedies and family conflicts boiling in her mind, which she later spoke about to me. She was not at peace neither from within nor at home.

Indeed, tomorrow will be better if we remain resilient today!

The trouble-maker, who was shivering from fear of being judged or admonished by me, made no trouble until she was told that it’s okay to be the way she is. Childhood is all about fun and games — and adventure! And then the rest joined in. Giggling and celebrating their newfound selves. After this one session their monkey tricks were on peak, I must say.

They brought me letters and wrote their hearts out. With affection in their eyes, they asked me whether all this concern and politeness towards them is genuine or just an eyewash? Children speak without any filter unlike us! All I said that all my childhood I lacked the presence of a wise person in my life – a mentor. Now, when I have the opportunity to become one myself, I am hell-bent to provide you with one.

We collaborated together, thought and identified the issues in our lives that bother us. The mentees were just led by their mentor and then, there they were in full swing, brainstorming about how they can fix their community’s problems. Injustice, pollution, poverty, illiteracy – these young (termed as underprivileged) minds outdid themselves. One would get awestruck by their willingness to take the responsibility of creating their tomorrow themselves. And this was the whole concept of the TCF’s Rahbar programme:

From a single thought to bringing it into action. From acting upon it to making it a habit. From practising good habits to maintaining a good character. And with the determination in the character creating your own destiny.