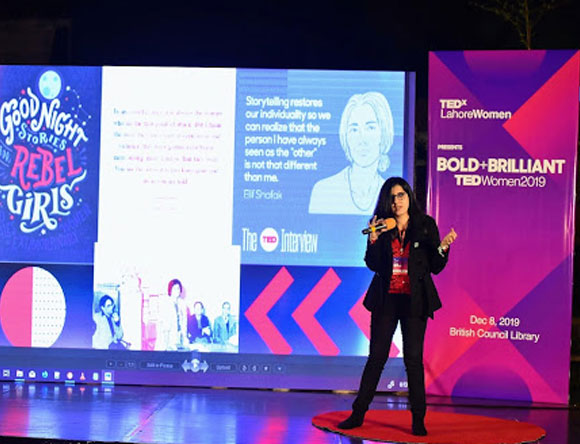 “She was a gypsy, as soon as you unravelled the many layers to her wild spirit she was on her next quest to discover her magic. She was relentless like that, the woman didn’t need nobody but an open road, a pen and a couple of sunsets.”

Mariam Saeed Khan is not your conventional next door human. A believer that her life events played a domino effect, considering where she stands today, she is a creative writer, a poet, a journalist, a footballer, and above all a humanistic digital storyteller covering many aspects of artistic expression via different mediums. My first encounter with her left me in awe when I found her improvising on stage during a spoken word performance with just a hint of the theme and the topic in her mind, which usually require a lot of practice and memorization. Her poem was about a legacy that she had inherited from her mother through her words, poetic interest, and creativity that she wants to pass onto her future son and daughter. She caught my interest as an individual with a high self-esteem, then.

How she achieved all that she is; this is her story of empowering the generation of women.

She finds the pieces of her soul taking-off like paper planes and reaching their destination – into the souls of her audience.

The air beneath Mariam’s paper planes are words both uttered in her voice and written by her pen. These words as fragments combine to form a spectrum of many ideas that is akin to reincarnation of a colourful image of Mariam herself. Her failures have shaped her into a person who likes to play like an underdog until she has reached her goal.

Mariam had always been a shy observant child. She recalls that she was never a teacher’s pet, being an introvert. Particularly because she lost many loved-ones as a child including her mother to leukemia at just a tender age of one-and-a-half; later, her aunt at 12, and then her childhood friend at the age of 17. Death, itself, was a blessing in disguise as it connected her to her gift  in the art of writing that slowly healed her from her losses. She had a hard time adjusting with the new normal around her. Hence, she began her writing journey in grade 7 with the debut poem, “Lady in a Deep Sleep” that got published in her school magazine (2006). In the same year, she also wrote her first Sci-fi short story titled, “The Earth was A Dot” that got published in Smash Magazine Pakistan.

This set one thing clear: she was never willing to conform to what was considered a ‘norm’. She narrates how her Math teacher named her “Mission Impossible” because she was not good with numbers and equations, and had a different approach to solving the sums than the textbook methodology to her teacher’s dismay.

Ironically, Mariam lived up to the title, though!

She transformed from a highly introvert into an ambivert. Losing her loved-ones to death gave her the realization that she has already been through the climax of her life at a very early stage and, now, all that is left is to find an ending to it and start afresh.

The journey of transformation and exposure began within her family’s social circle as she had to interact with people of varying age-groups, which helped her in developing her communication skills. This way Mariam’s passion brought her to what she takes pride in today. She started reaching out to different people via Facebook, email and LinkedIn during her undergrad years. The first interview she conducted was of Moin Khan (Motorcyclist journey from San Francisco to Lahore) – January 2012, and it all happened with her reaching out to him via Facebook. She had no reference points, but only her conviction and why she wanted their story to be heard. Luckily, all those renowned people [Vishal Bhardwaj, Aisam Qureshi, Zeb Bangash, Anupam Roy, Amir Khan, Awais Khan, Sanwal Eskhaelvi, Shehzad Roy, Markhor [Atoms] and Ali Zafar to name a few] from various fields believed in her words. All this made her even more confident about herself.

These people have one thing in common for her; their work has inspired her always.

Mariam has also shown her talents and spoken about her vision at the TedxWomen Lahore’19 on “Why rewriting the past stories of family lines matter for the future narrative?” which was about breaking patterns of meaningless traditions through generations for new stories to take place for the future legacy to begin afresh. This attendee talk was also reviewed by the TED Official Team as an audition tape. To create a difference, she advocates for this idea through her writings as well. Therefore, on International Women’s Day 2020, she was featured on Young Creative Council UK for her creative and futuristic story for the project “Badass.Gal”

Mariam’s poetry has been read, shared, and reviewed by Paulo Coelho, Kaveh Akbar, Queen Mary University London, Ink-Q Adam Schmalhoz, Ahdaf Soueif, and Poetry Foundation UK. The journalistic features are appreciated, unquestionably, by the creative industry of Pakistan. Here are the poetic lines that she is dedicating to the readers:

“Ask! And trust me, the answers come to you

As they can see the conviction and honesty in your words

The moment you realize the people’s birdview, stick to what concerns you

Bring to the table what you have; and

Then onto the next chapter”